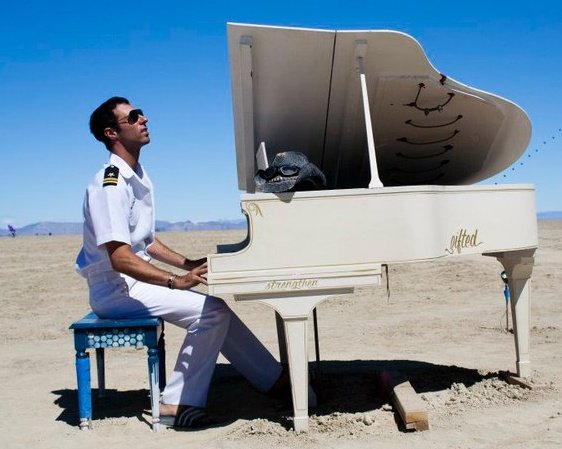 Playa Name: Soup
Burns: 8
Camp/Village Name: Bumblepuss, in Nectar Village
Past Burner Projects/Events: I’m the Mayor / Enabler of Nectar Village, was a Lead for the Heebeegeebee Healers, and contributed to assorted mutant vehicle projects. We recently brought Nectar Village to Symbiosis, which was an exciting way to expand the presence of Nectar Village outside of Burning Man.

With 300 people, 5 different camps, and all the different needs that go with that, there seem to be as many subplots as All My Children going on.

So, staying on top of those things, keeping it organized, and communicating to all the right parties is very time consuming. Aside from that, doing the layout for one of the largest land grants in BRC can also be tedious because of all the stakeholders.

While initially I did it because I like the smell of patchouli in the morning, now it is really about the smiles I see on the faces of people that visit. We put together a camp that attracts 1000’s daily, and when they leave they are totally blissed out, having enjoyed an amazing oasis for the mind, body and soul.

BL: Besides building more bike racks, what are you really excited about this year with Nectar Village?

Soup: What I’m most excited about this year will affect Nectar Village, but not only Nectar: I’m very excited to se how this lottery turns out and who turns up. I sincerely hope it shakes things up a bit and people go, “Woah! I don’t remember Burning Man being like this!” Burning Man hasn’t changed much in the past 5 years, and shaking things up is going to be fun to see!

BL: Whether it’s part of a village or not, what makes a great camp at Burning Man? Besides ensuring there is enough bacon what’s one thing that may not be obvious that people organizing a camp can do pre-Burn that can really make or break camp chemistry?

Great camps are made of great people, pure and simple.

Pre-burn, in organizing a camp, I think it is really important to make sure you have a rule about allocating slots to new people to the camp. We do in our camp, and it is that 20% must be new. We introduce them to the group online, and get them involved in doing something so they feel connected. Then when they get out there, we get all the new folks together and give them a project to work on- which I can’t tell you about; it’s a surprise for all our first timers, but it is loads of fun!

BL: As a Burner veteran, what do you do to not get all grizzled and burned out?

Soup: What is this, Piss Clear? Adrian, this guy is stealing your thunder….

BL: Ok, fine, what’s your advice for Virgins this year?

Soup: Don’t try to do too much. But do something! Join a theme camp and ask how you can contribute. Make costumes and wear them.  Bring a bocce ball set and set it up on a street or in the playa and invite people to play. Serve tea on the side of street to passersby. But do something where you are touching other people’s experiences, and you’ll have a much more fulfilling time. Don’t try to do all those things, because you are already going to have enough to worry about out there and we want you to come back!

Soup: Depends who built it, my dear chap….

Burning Man is a great place to be devoid of responsibility, but when you take it on out there, the responsibilities can be pretty heavy.

Captaining a large art car means you are responsible for the riders- which was 50ish in my case- and the hundreds of people running around your car- and in front of it- on the ground. Even though it is a big party and good fun, those are still people’s lives, and a lot of them, and you’ve got to be really focused and careful to respect that responsibility. It’s where I got my first gray hair….

BL: You were at Symbiosis – how was it?  Are the Burn-A-Like festivals such as Symbiosis, Lightening in a Bottle, etc. and the Regionals the key to Burning Man’s success and longevity?

Soup: Symbiosis comes in at above average, but faced a number of challenges- that the event happened at all is a testament to the constitution of the producers. We brought Nectar Village out there this year and were very happy that we were invited to be a part of their festival. It would be fun to collaborate with them more.
I will say that I don’t think the regionals are the key to the longevity. I’ve heard it a lot, and I just don’t buy it. The regionals never capture enough of the essence of Burning Man. I’ve heard hope that the big problem is “critical mass,” getting enough people out there to have enough projects and camps to make it more like Burning Man. But… I think they are their own scene. I think Burning Man will always be Burning Man and the festivals that target Burners, and the regionals, will always be in the same eco-system, but distant cousins. And I think either can survive without the other.

BL: You think Burning Man can expand to 100,000 people over the next five years as has been rumored?  Is that desirable, do you want to be a part of it?

Soup: Well, there is a lobby going on for it right now and the BMorg has hired a lobbyist firm in DC to effect certain changes. I don’t know if they can expand. I think they could do the infrastructure, it’s been done before by other festivals, and the BM folks are amazing and creative and capable of anything. I don’t know if the community will support it, if the demand will be there or if the government will allow it.   It’s not entirely desirable for me. I like where we are now, maybe even a few years back with 5-10k less. But 100k seems awfully large. I like being able to walk through the crowd at the biggest shows… and

how will popular theme camps cope? With all those people pulling on our resources, it will require more resources, and/or security to turn away those we can’t safely serve.

Resources are not readily available to increase for every theme camp, nor does every theme camp scale well; and turning people away is not the inclusive experience we want to offer. I think this reality frightens me most: can the theme camps support more people? Do we want to?