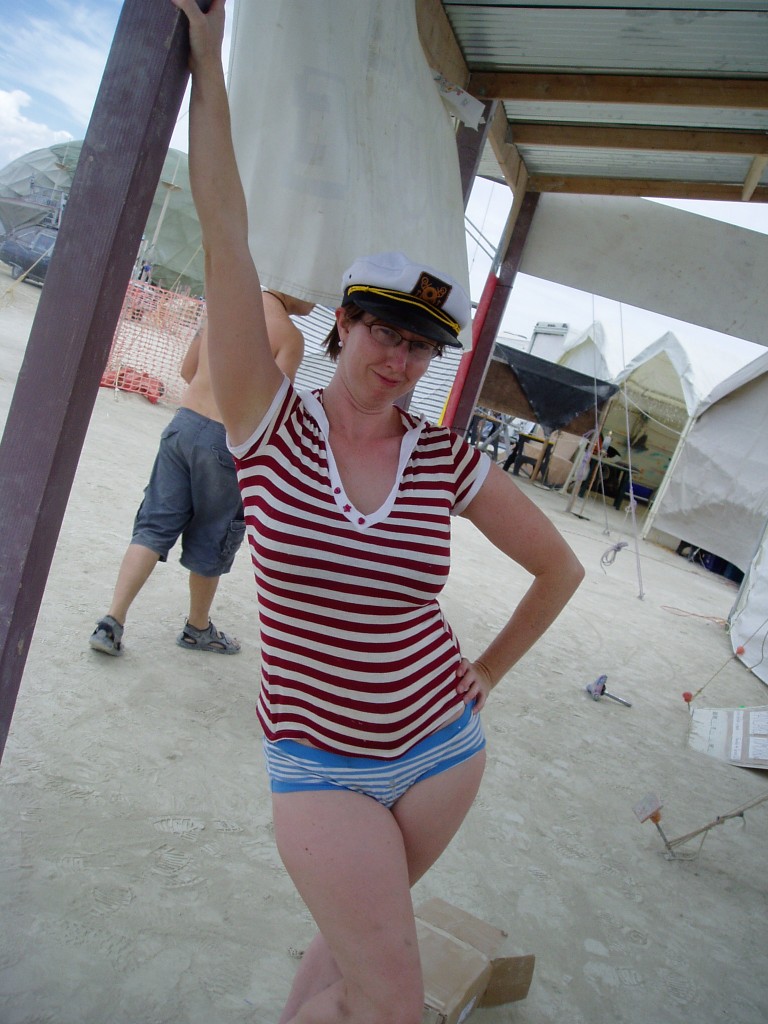 Playa Name: Kat (I don’t really have a playa name. I figure it’s Kat who does the planning to get to Burning Man, Kat who earns the money, and it should be Kat who gets to have an amazing time on the playa. Also, I totally love Kat.)
Burns: 7
Camp/Village Name: Pancake Playhouse
Past Burner Projects/Events: I’ve got nothing but Pancakes in my heart

BurnerLove (BL): Pancake Playhouse serves pancakes and plays softrock. Sounds pretty simple, but I bet its not. What are the biggest challenges to keeping the Bisquick and Neil Diamond flowing every year at the Burn?

Kat: Simple and not simple – that’s exactly right. Sometimes, it seems so overwhelming – and other times, what we do seems incredibly easy compared to other camps that, say, put on all night dance parties.

Funding is always an issue. Our annual budget isn’t much – about $4,000 if we don’t make any major camp improvements. And working in the non-profit world, $4,000 for a budget is small change. But actually getting all 4,000 of those dollars can be incredibly challenging. Asking our campers to contribute cash (in addition to their blood, sweat, tears, and syrup) is difficult. Asking other Burners is even harder.

Another challenge is that we are a small camp.

I think we have about 40 core members that come and go, with probably about 25 of those members on the playa every year. That keeps us tight – we love each other an incredible amount

– but it means that everything that needs to get done around the camp, from dish-washing to de-mooping, has to be divided among a small labor pool. It can be exhausting.

One thing we’ve gotten really good at is running a tight ship in the kitchen. We let it rip, we have a good time, we dance – but everyone is wearing a head-covering, everyone has followed the proper hand-washing procedure, and everything is up to code. That used to be a challenge, but now we regularly get 100% on our health inspections.

Sometimes, the biggest challenge is just being there for our customers. If we’ve been out partying the night before, we may not be the bright, cheerful faces you’d expect when you’re the morning’s first customer – or if, God forbid, you’re early. We don’t start the soft rock until we’re ready to serve, and sometimes I wish that wasn’t the case. Because as soon as John Denver starts to sing, we’re all in a good mood again.

BL: What keeps you coming back to the Burn every year and more specifically to be a ‘Pancaker’ rather than some other awesome camp?

Kat: Oh, you’ve hit a nerve there. I agonize every year over how much I love Pancake Playhouse. Sometimes, I wonder what it would be like to camp somewhere else – somewhere that isn’t as much work, or is at least a different type of work. I want to experience Burning Man differently. But I can’t tear myself away. I feel like a girl who marries her high school sweetheart. What I’ve got with Pancake Playhouse is so incredibly special – but since I’ve never known another lover, I’ll always have a nagging wonder in the back of my mind.

What makes it awesome to camp with Pancake Playhouse is first and foremost my friends. We are a tight-knit group and I love these people, both individually and collectively. The next best thing is the recognition I get from strangers. When you say you camp with Pancake Playhouse, nine times out of ten you get a huge hug, a warm smile and an “I love you guys.” And that makes me feel like a million dollars.

And the feeling I get when I walk through camp in the morning, past a bunch of happy customers singing along to George Michael – you can’t buy that.

Kat: ‘Don’t Go Breaking My Heart‘ by Elton John and Kiki Dee
‘Sweet Caroline‘ by Neil Diamond
‘Hold on for One More Day‘ by Wilson Phillips

BL: What’s the key to a great pancake? Any technique specific to Burning Man or an extreme cooking environment like the playa?

Kat: We use Krusteaz batter, which requires only water. The secret is to add much, much more water than you would in the real world. They cook faster and taste better that way.

But we serve the best pancakes on Friday morning, when we have our annual White Trash Breakfast and put PBR in the batter.

BL: What should you never ever do to a pancake under any circumstance?

Kat: I don’t have an answer for you. Instead, can I tell you a story? Okay, good.

Last year, a hippie couple came to our camp Friday afternoon after we had shut down service for the day (and the week). I was there relaxing in our main service / living area, and told them I was sorry but we were done serving for the week.

They said “No, you don’t understand. We don’t think we’ve won Burning Man unless we watch something burn every night and eat a pancake every day.

We’ve eaten a pancake every day that you’ve been serving since 2005. But today, we fell asleep after we watched the sunrise. All we need is a pancake out of the trash, just so we can say we’ve won.”

I’ve never wanted to help people more. I would have cooked them up fresh cakes then and there, but because it was our last day of service, we didn’t have any batter left at all. So (after sounding the alarm so that all my campmates could meet these incredibly devoted fans), we fished up the best looking failcake from the trash, covered it with syrup, and they each took a bite. It really wasn’t as gross as it sounds, and it absolutely warmed my heart.

BL: Advice for Virgin Burners? How about veteran Burners – how do you keep it fresh? Or what excites you about this year’s Burn?

Kat: For virgin Burners, I always say: Get as prepared as you can. Bring the stuff you need to be self-sufficient. And when you fail in being self-sufficient (and you will fail), your whole community will be there to support you.

For veterans, I say: Lighten up! Burning Man is amazing, and you know that, which is why you go. Let it in! Be open to the possibility!

I know we all love sit and whine about the newbies and the frat guys and the bmorg, but really – it’s Burning Man! Love it for what it is.

BL: I know you are an Opera ‘Affectionado’, any great Opera moments on the playa? What Opera would you like to see performed at The Burn?

Kat: I love it when I have Burning Man experiences I can tell my Mom about. I had one in 2010. I’ve always wanted to go to the Early Riser’s Classical Music Cafe for coffee and classical music (two of my favorite things), but it’s always across the city and right in the middle of pancakes. Pancakes are my raison d’etre at Burning Man. But in 2010, knowing it was important to me, my campmates forced me to take a morning off to go hear classical music.

On Wednesday morning, I rode my bike to the other side of the city and arrived at a small and silent cafe. “Am I too late or too early or too weird for classical music?” I asked the guys who appeared to be in charge. “We have plenty of coffee,” they said, “but our violinist never showed up.” “Well, I have my MP3 player in my pack and it has tons of classical music on it, if you can hook me up to your sound system.” “Sounds like you’re our guest DJ. Someone get Ryan.” The sound guy hooked me up to their system and I dj’ed at Burning Man – on the Esplanade, no less! I played Vivaldi and Beethoven and slipped in some of opera’s greatest hits – The Flower Duet from Lakme and Au Fond du Temple Saint from the Pearl Fishers. Sadly I didn’t leave myself any time for some Saint-Saens I wanted to play. But regretting some of the set is, I think, part of being a DJ.