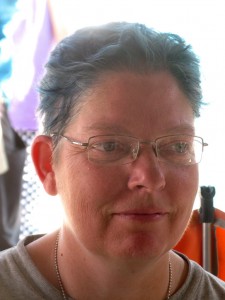 Every week BurnerLove interviews one fabulous Burner, today we feature Miss Information and take a peek at the Burner community in San Diego.

Any Burner related project(s) you want to promote?

San Diego is also bringing its second CORE project to the Playa this year, a project titled “CarouShell“, which will be an actual human-powered revolving carousel based on the Balboa Park carousel, the twist being that the ridable critters will be marine life native to the San Diego coast as well as a surfboard (being chased by a white shark).  We also have a Facebook page at , and a WePay donation page.

Did you get active with the Burning Man community before you went to Burning Man?  What was the spark that got you going?

I attended my first local event in 2006, an event called Xara Dulzura. This was my first exposure to the Burning Man community.

I absolutely loved the feeling of community that I experienced there, the open acceptance of so many different types of people, and the culture. I knew at that point that I wanted more.

I attended a few more local Burning Man events, including Fuente Eterno in the Canyon de Guadalupe in Mexico, and a couple of San Diego Decompressions, as well as some local social events, parties and the like. This all culminated in me going to Burning Man for the first time in 2009, as part of a theme camp called Camp Makin’ Bacon. After I returned from my first Burning Man, I was asked to volunteer for the 2009 SD Decom, and ended up creating event graphics for the event. That was my first active role in terms of volunteering with the community.

The obvious answer to this question is the people, of course! But I think that in combination with our amazing weather, and a vibrant art and performance community, there’s so much to do here. There’s also a very laid back feel to our community here. We have a few “hub” houses for Burners here, specifically one in Escondido called Pu’Uhonua, where the residents frequently throw large community gatherings at least two times a year, called Splash Up (before the Burn) and Splash Down (after the Burn). These events always bring out a large variety of people, both newbies and veterans to the community. In addition,

when I was still new to the community, I was never made to feel like a “noob”. People were more than eager to help with questions I had, and were super-excited when I finally made it to my first Burn.

First thing that comes to mind about the community that puts a smile right on your face?

You are very involved in the San Diego Region, from YOUtopia, to being one of the SD regional contacts, and many other of the San Diego Burner community.  What’s the attraction for your involvement in the ‘off playa’ community and events?

My attraction is primarily a desire to have Burning Man and its culture be a year-round part of my life. I enable that desire by participating in as many of our community events as I can, either as an event lead (SD Burning Man Film Festival), as communications lead for YOUtopia, and by attending board meetings of our regional funding and organizing entity, Sundburn LLC.

with the increasing demand for Burning Man tickets over the past two years, I think the role of regional “off playa” communities and events is going to continue to become more important,

as more and more people who want to experience the culture find themselves unable to make it to Black Rock City (or what some of us jokingly refer to as the Gerlach regional).

The COREProject appears to be a hit – for San Diego Burners and the other Regions.  Why do you think that is?

The CORE project is a tremendous opportunity to build community, at least that’s been our experience in San Diego. Last year,

the first year for the CORE project, saw the arrival of members to the community who had absolutely no awareness that there even was a San Diego Burner community,

heard about our CORE project, came to build parties, and ended up participating in other community events as a result of their involvement with the build. And that’s certainly proving true this year as well.

The wonderful thing about CORE is that people with all different kinds of skill sets can still participate, whether they’re good with tools, painting, fundraising, or just want to come out to the builds in support of the project. All are welcome, and the diversity of people in attendance at the builds is awe inspiring to see.

I’m so glad to hear about the CORE Project.  What’s the biggest challenge you are facing this year pulling it off?  ?

As with most large art projects going to the Playa, the biggest challenge is fundraising. Our budget for the San Diego CORE project is $10,500, which includes  money for build supplies (lumber, tools, paint, etc.), as well as transportation of the project to the Playa (truck rental and gas). We have currently raised close to 50% of our goal, through a variety of Burning Man ticket raffle sales, Kickstarter, WePay donations, a small grant from the Burning Man organization, and a grant from our local entity, Sundburn LLC. People who are interested in donating to our project can visit https://www.wepay.com/donations/core-san-diego. To learn more about our project, visit our Facebook page.

What’s the biggest (good) surprise about SDCORE this year?

The biggest (good) surprise both last year and this year, is what a tremendous community building exercise the CORE project is. People hear about the CORE project here in San Diego, and are excited to find that there’s a thriving San Diego Burning Man community that they had no idea existed. Everyone participates in building the project, whether they’re good with tools, painting, watching kids in the Kidsville section of our build site, or even donating to help make the project happen. In addition, due to the hazardous wildfire conditions in San Diego, we rarely get to build and burn effigies of any substantial size, so this gives our community an opportunity to participate in and be a part of a large effigy burn, something that many other communities take for granted in other parts of the country.

Any thoughts on the Burning Man ticket situation this year?  Growing Pains, signs of trouble to come?

My personal take is that the Burning Man organization was trying their best to alleviate the sellout conditions last year and trying to minimize scalpers getting a hold of tickets and then selling them above face value. In addition, the 2011 event exceeded the BLM maximum participant ceiling, causing the event to be subject to BLM review this year. I think they were trying to contain the possibility that would cause that to happen again, putting the event in jeopardy in future years. I think the organization very much takes to heart the problems that this caused for so many wanting tickets who were unable to get them through the lottery, and who are still looking for tickets, either through STEP or through others selling their tickets because they’re not going after all.

If the Burning Man festival didn’t happen starting in 2013 do you think the regional Burner communities are well established/rooted enough to continue and thrive?

I definitely think that if there were no Burning Man 2013 that it would increase the focus on regional communities to continue the culture. In fact, I think that this is already happening. Many who can’t attend the Burn are creating their own Burns in their region. For example, YOUtopia, San Diego’s regional event, used to be called a Decompression, but we’re moving away from calling it that and are now referring to it as our regional event.

I also think we’ll be seeing more regions collaborating to put on multi-region burns, similar to Lakes of Fire.

Quick words of advice to Burner Virgins this year?

Read the first timer’s guide!  And leave your personal expectations for the event at home in the default world. Burning Man is about discovery, not expectations.