The Most Connected Camps on the Playa: BurnerMap Analyzed!

Don’t forget to print your personalized Burner Map
BEFORE you leave for the playa!

So we geeked out a bit to visualize the camp data from Burner Map 2013 with the help of our good friend Matatertots. By measuring the number of friendship linkages between each of the camps on our crowd-sourced list (eg. 2014), we processed some aggregate data on the social webs connecting camps which used the app that year. 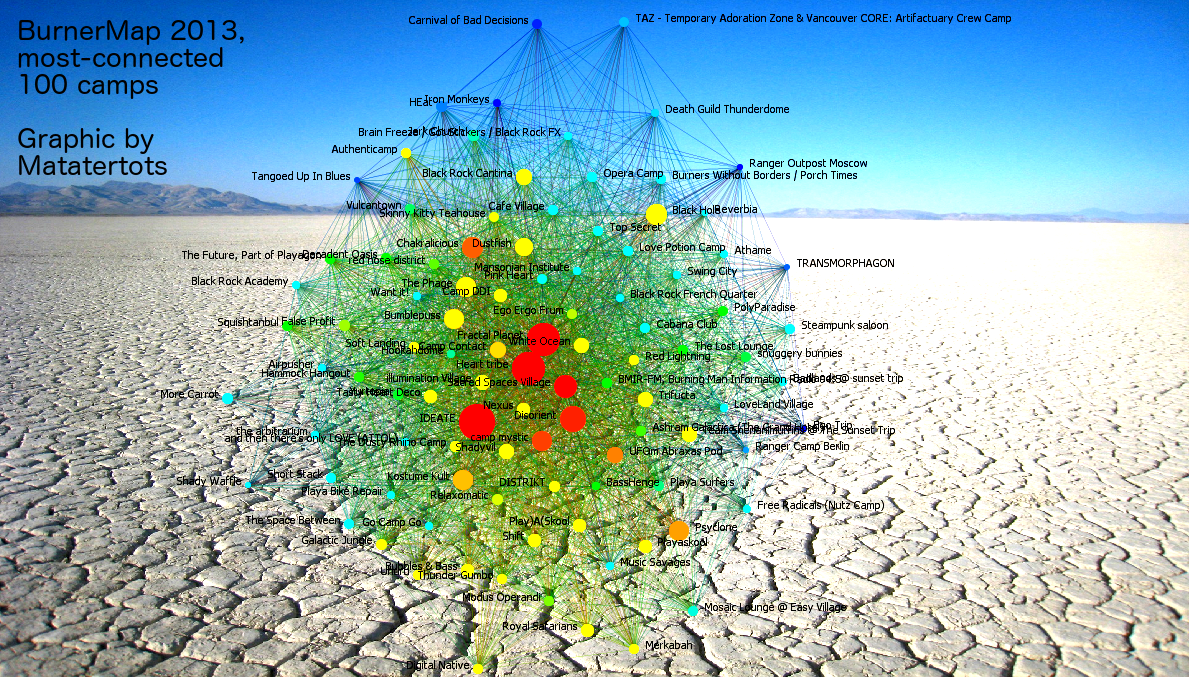 Matatertots plotted in degree centrality vs. eigenvector centrality.  Points lying above the line are camps that are more connected to influential camps than their own level of connectivity would, on average, predict.  Similarly, those lying below the line are camps that tend to be connected less to influential camps than their level of overall connectivity suggests. 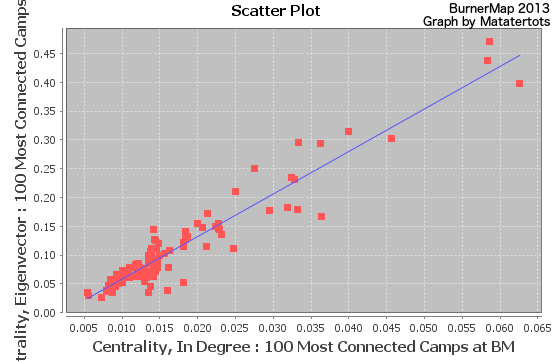 Degree centrality: The sum of all links between the focal camp (the one for which you are calculating the centrality) and other camps. So if I was the only one in Camp Dark Sparkle (CDS) on Burnermap and I was only friends with the four of you guys, CDS would have a degree centrality of 4.

Eigenvector Centrality – This was the name of an important but obscure sub clause in the Cold War era Warsaw Pact.  Frederick Eigenvector was a minor Slovakian General during the Soviet era known for his love of combining statistics, military strategy and meetings.  At an early meeting of Warsaw Pact representatives in Bratislava in 1958 Eigenvector convinced the other delegates of having all future meetings of the Warsaw Pact in the most central part of any city they agreed to meet in as a defense against a pre-emptive strikes from the West because Nato would want to minimize civilian casualties.  Attendees agreed and inserted it into the Warsaw Pact Framework where it was named ‘Eigenvector Centrality’.  Frederick Eigenvector was assassinated by a Nato Fields Medal winner on the outskirts of Ljubljana in 1962.

This entry was posted in Burning Man. Bookmark the permalink.